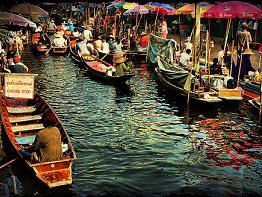 Photo By: Anup
From USD

Price shown is based on the lowest price per person over the next 30 days $874
1 review
Available:
Fri
Depart from:
Bangkok, Thailand
Duration:
7 Days 6 Nights

Very good Tour. Really enjoyed seeing Thailand through the eyes of a local. We had excellent Guides, Bobby and Tony. Bangkok and Pattaya trips are excellent. We had experiences most probably wouldn... More>>

After breakfast, we will fly to Chiang Mai, TH. We will proceed to the Wat Phra That Doi Suthep Temple. We will then visit the Home Industries Village and the Bosang Umbrella Village. Kantok Royal Thai Dinner will be served during which Folk Dance Show will be staged for enjoyment of all. After dinner, all can leisurely roam the night market.
Deluxe Hotel: Holiday Inn (5*) or similar
Breakfast: IncludedDinner: Included
Day 6

Today we will take the coach to Chiang Rai, and later on to Mai Sai Village. After lunch, we will proceed to the mysterious Golden Triangle to visit the newly built Opium Museum. The Long Neck Hill Tribe will be the next destination before returning to Chiang Mai for dinner.
Deluxe Hotel: Holiday Inn (5*) or similar
Breakfast: IncludedLunch: IncludedDinner: Included
Day 7

Today, guests will be transferred to the airport for flights home.
Breakfast: Included
Close All Expand All

I recommend this tour!
Very good Tour. Really enjoyed seeing Thailand through the eyes of a local. We had excellent Guides, Bobby and Tony. Bangkok and Pattaya trips are excellent. We had experiences most probably wouldn't have done on our own. The last part of the tour is also good but its a busy schedule, and roads are curvy and long drive from Chiang Mai to Chiang Rai, so be prepared for fast driving. Generally the hotels are good, but varies between 2.5 stars to 5 even if you specify 5 star. The food was really mostly good and always plentiful throughout. However we developed a stomach issue along the way (at a quiet hotel restaurant), so carry probiotics and charcoal tablets for places which seem suspect, or avoid them if possible. As a general rule, if the restaurant is busy, then that's a good start. Enjoy :)