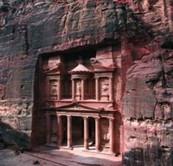 3% Group Discount
From USD$655
Daily
Amman, Jordan
English
2 1
Visit Petra and explore the city of "Wadi Musa" valley of Moses. Enjoy a 4hr Wadi Rum Jeep safari and have a Boat Ride, Snorkeling and lunch at Aqaba.
Price In USD (Price per person based on double occupancy)
Price (/person)

We will depart to the ancient city of Petra, JO, one of Jordan's best-known tourist attractions. Admired then for its refined culture, massive architecture, and ingenious complex of dams and water channels, Petra is now a UNESCO World Heritage Site. In Petra, we will explore chunks of this fantastic once-lost city which is full of tombs, temples, an impressive amphitheater, and a Roman colonnaded street. The intrepid can ascend either on foot or by donkey the hundreds of rock-cut steps to Ad Deir, a first-century-AD monastery. We will eat and spend the night at a campsite in Wadi Rum. Alternatively, guests may stay at a hotel in Petra.

In the morning we will explore the desert around Wadi Rum by jeep for 4 hours. This is a stupendous, timeless place, virtually untouched by humanity and its destructive forces. We will see Nabataen inscriptions, Lawrence's Cave, Rock Bridge, and some of the most beautiful sand dunes in the world. From there, we will travel to Aqaba, JO for a sunset cruise, snorkeling, and dinner After, we will return to Amman.