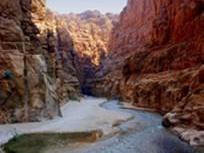 Price In USD (Price per person based on double)

We will begin our tour in the Wadi Mujib, JO nature reserve, the lowest in the world. It lies in a deep valley holding some of Jordan's most breathtaking scenery. We will hike for about 2 hours on the Siq Trail, negotiating waterfalls and climbing rocks along the way!

From there we will head to Kerak Castle. Its diverse history dates back to the Byzantine period. Our day ends in Wadi Rum, Jordan's largest desert and one of the most spectacular desert landscapes in the world.

In the morning we will explore the desert around Wadi Rum by jeep for 4 hours. This is a stupendous, timeless place, virtually untouched by humanity and its destructive forces. We will see Nabataen inscriptions, Lawrence's Cave, Rock Bridge, and some of the most beautiful sand dunes in the world. From there, we will travel to Aqaba, JO for a sunset cruise, snorkeling, and dinner After, we will return to Amman.
Close All Expand All