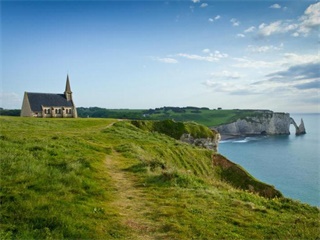 Today we will leave Paris and drive northwest toward the French coast. Our first stop will be the town of Rouen, FR, where we will embark on a sightseeing tour that will take us past places such as the Rouen Cathedral. From there, we will head to the beaches of Normandy, FR. We will explore the history of the area at the Normandy American Cemetery and Memorial and Arromanches-les-Baines before retiring to the town of Caen for the night.
Deluxe Hotel: Caen Novotel or similiar
Day 2

Today, we will visit the walled port town of Saint-Malo, taking a guided tour of the area. Next, we will head to Mont-Saint-Michel, a tiny island commune, where we will take a tour of the castle and the Abbey. After that, we will return to Paris. Please see "Departure and Return" for more detailed information regarding pickup and drop-off times and locations.
Close All Expand All