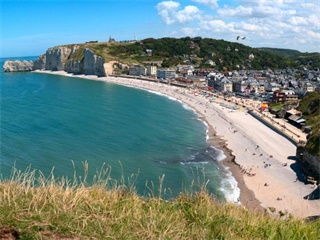 Price shown is based on the lowest price per person over the next 30 days $685.64
Available:
Thu, Sat
Depart from:
Paris, France
Language:
English; Spanish
Duration:
3 Days 2 Nights

Guests will be picked up from the specified departure location in Paris. To begin this tour, we will travel through Normandy until we reach Rouen where we will take a walking tour through the old city center, taking us past Gros Horloge, the cathedral where Joan of Arc. We will continue to Honfleur to take some free time for lunch. Then, we will visit Omaha Beach and the American Cemetery. We will also stop at Arromanches before continuing to Caen, where we will spend the night.
Day 2

Today, we will visit Saint Malo, the city of pirates, where we will enjoy some leisure time for lunch before exploring Mont Saint Michel. Afterwards, we will go to Angers for dinner and to spend the night.
Day 3