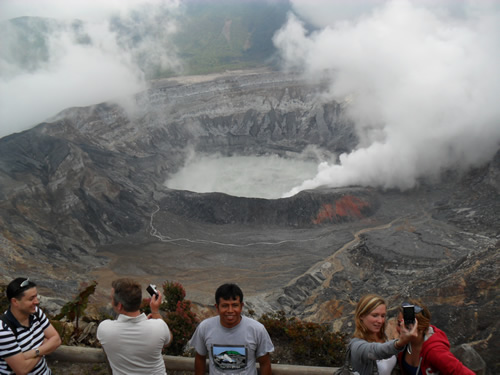 Price shown is based on the lowest price per person over the next 30 days $1200
Available:
Daily
Depart from:
San Jose, Costa Rica; Alajuela, Costa Rica
Language:
English
Duration:
16 Days 15 Nights

Today, we will meet the local guide holding a sign with our name at San Jose International airport and then we will be taken to hotel in San Jose downtown.
Standard Hotel: Hotel Cocoon or similar
Day 2

Today, at 8:00am, we will head to Manuel Antonio Beach to spend the day in the sun. This is also where we will spend the night.
Standard Hotel: Hotel La Colina or Similar
Day 3

We will be able to enjoy the day at our own pace as we explore Manuel Antonio Beach and National Park, where we will be able to see a great deal of wildlife in the jungle.
Standard Hotel: Hotel La Colina or Similar
Day 4

Today, around 9:00am, we will make our way to Monteverde. Along the voyage, we will pass through the rainforest of Costa Rica.
Standard Hotel: Hotel La Puesta del Sol or similar
Day 5

Today we will explore the awesome and the best beach in the pacific of Nicaragua on own, where you will enjoy it swimming or surfing.
Standard Hotel: Hotel La Puesta del Sol or similar
Day 6

Today, we will head to La Fortuna, a trip that will take about 3 hours. This is where we will spend the night.
Standard Hotel: Hotel La Arenal Rossi or similar
Day 7

At 3:00pm, we will make our way to the base of the Arenal Volcano where we will go on a walking tour for about 2 hours, which will culminate in a grand panoramic view by the warm, natural rivers.
Standard Hotel: Hotel La Arenal Rossi or similar
Day 8

Today, we will be able to explore La Fortuna at our own leisure.
Standard Hotel: Hotel La Arenal Rossi or similar
Day 9

Around 9:00am, we will make the drive from La Fortuna to San Jose, about a 3 hour ride. When we arrive, we will have the remainder of the day free at our own leisure.
Standard Hotel: Hotel Cocoon or similar
Day 10

Today, at 9:00am, we will begin our drive to Puerto Viejo, which will take roughly 4 hours. When we arrive, we will have the remainder of the day free to spend at our ow pace.
Standard Hotel: Hotel Cocoon or similar
Day 11

Today, we will explore Bocas del Toro on our own.
Standard Hotel: Backpackers Oveja Negra
Day 13

Today at 9:00am, we will take a boat to Almirante and board a van to Boquete. After this 4 hour ride, we will have the rest of the day free.
Standard Hotel: Backpackers Oveja Negra
Day 14

We will have the entire day to explore Boquette at our own pace.
Standard Hotel: Backpackers Oveja Negra
Day 15

Today, around 8:00am, we will take a bus from Boquete to Panama City.
Standard Hotel: Backpackers Oveja Negra
Day 16

Guests will be free to leave today for whenever their departure flights are scheduled. Please see "Departure and Return" for more detailed information regarding when to book flights.
Close All Expand All