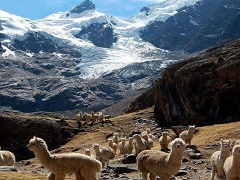 Today guests will gather in La Paz. After pickup from the airport, guests will be transferred to the hotel and enjoy the rest of the day at their own leisure.
Standard Hotel: El Viajero 3* for Backpackers/Gloria 3* for Tourist Class
Deluxe Hotel: Casona Boutiqu 4*/Presidente 5*
Day 2

Visiting The The Square Murillo, Cathedral, Palace of Government, Church of San Francisco, Viewer of Quilli Quilli, Gold Museum, Market of the Witches and the Valley of the Moon. Then we go on through a highway asphalted to Tiwanaku, visit the Archaeological place of Tiawanaku and their main ceremonial centres within 2.5 hours: The Pyramid of Akapana, Semi-underground Temple, Temple of Kalasasaya, The Door of the Sun, etc.
Standard Hotel: El Viajero 3* for Backpackers/Gloria 3* for Tourist Class
Deluxe Hotel: Casona Boutiqu 4*/Presidente 5*
Breakfast: Included
Day 3

After Breakfast, we'll enter the Salt Flats traveling across this stunning landscape to Incahuasi Island by taking an half hour Land Cruiser. Then we will have a lunch in the center of the salt flats. After that we will continue with the same transport to the Salt Hotel. Then we will arrive to San Juan or Chuvica and spend the night and dinner.
Standard Hotel: Family House for all Hotel Class
Breakfast: IncludedLunch: IncludedDinner: Included
Day 4

Today we will leave for the Green lagoon, which is located to the feet of the volcano Llicancabur. Afterwards we will continue to Polques, where we have lunch, break. Then we continue to the Red Lagoon, visiting the active Volcano Ollague, the lagoons of Canapa, Chiarcota and Sling, lagoons that are populated by flamingos. In the afternoon we will continue our journey passing the desert of Siloli where we will observe an interesting rocky formation well known as the Tree of Stone. Then we will spend the night and dinner here.
Standard Hotel: Family House
Breakfast: IncludedLunch: IncludedDinner: Included
Day 5

At around 5:00am we will leave Laguna Colorada early to make it to the first stop,Sol de Manana. Next stop is the Hot springs. From Laguna Challviri hot springs we will drive towards the Laguna Verde passing through the surreal desert of Salvador Dali. Arriving at Laguna Verde before 10:00am, we will be able to see the Volcano Lincacabur guarding the laguna. Afterwards we will come to the border transfer those heading to Chile. Then we head back towards Uyuni.
Note: Those wishing for a 4 day journey will spend the night in Villa Mar in a rustic lodge and return to Uyuni leisurely on day 4. Those wishing to do it all in 3 days will come back to Uyuni via San Cristobal and arrive approximately at 5:00pm.
Standard Hotel: Naira 3* in La Paz or similar
Deluxe Hotel: Gloria 3*/ Casa de Piedra 4*/ Presidente 5* in La Paz or similar
Breakfast: IncludedLunch: Included
Day 6

Early in the morning we will transfer to Copacabana Sanctuary, board the Catamaran Cruise ship, and then have a lunch while sailing to Sun Island. Then we will visit the Inca Garden, steps and fountain then the Inti Wata Cultural Complex including the Ekako Underground Museum, the traditional medicine and the Titikaka Reed Shipbuilders display centers, the Pachamama agricultural Inca terraces, a handicraft center, the Intica lounge and at the Manco Kapac look out. Afterwards we will visit the Inti Wata Complex at Sun Island includes a unique sailing experience aboard a huge Titikaka traditional vessel to enjoy a panoramic view of the Pilkakaina Inca Palace. We will have the opportunity to interact with one of the most unspoiled indigenous Titikaka villages visiting their own museums, houses and sailing in their vessels to an Inca holy temple. Lastly we will arrive in Puno and transfer to the hotel.
Standard Hotel: Balsa Inn 3* in Puno or similar
Deluxe Hotel: Qalasaya 3*/ Jose Antonio 4*/ Libertador 5* in Puno or similar
Breakfast: IncludedLunch: Included
Day 7

Early in the morning, we will take a tourist motorboat excursion on the Lake Titicaca to Floating Islands of the Uros. Then we will continue our motorboat trip to Taquile Island and then arrive at the Town of Taquile where we will have a lunch. After that we will walk through the various hills and archaeological sites of the long Island. In the afternoon, we return back to Puno for overnight in the hotel.
Standard Hotel: Balsa Inn 3* for Backpacker in Puno or similar
Deluxe Hotel: Qalasaya 3*/ Jose Antonio 4*/ Libertador 5* in Puno or similar
Breakfast: IncludedLunch: Included
Day 8

After breakfast we will head to Cuzco. We travel along the High Plateau of Collao, stopping at the Town of Ayaviri to visit the impressive Temple of Kalasaya. On the way we stop in Raqchi, where we can see a spectacular Inca Sanctuary built. Afterwards we pass through the La Raya Ranch where we can see troops of vicunas and llamas. Then we will pass by the lovely Wacarpay Lake offering spectacular views of the mountains. Then we will continue proceeding to the Town of Andahuaylillas and visit the Church of San Pedro de Andahuaylillas. We will have a buffet lunch in a countryside restaurant. Upon arrival in Cuzco we will transfer to the hotel.
Standard Hotel: La Joya Imperial 3* in Cuzco or similar
Deluxe Hotel: Royal Inka 3*/ San Agustin D 4*/ Marriott 5* in Cuzco or similar
Breakfast: IncludedLunch: Included
Day 9

After breakfast we will take a visit by your own to the Street San Blas. Hatunrumivoc is located close to Plaza Nazarenas famous for it's Inca walls. We'll find the 12 Angled Stone about halfway down the street. Then we will enjoy leisure time at the Central Market or Mercado de San Pedro. The San Pedro Market in Cuzco sits about an eight minute walk south from Plaza de Armas. In the afternoon we will have a sightseeing of Cuzco visiting the Main Square, the Cathedral and the Temple of the Sun or Korikancha. Afterwards we'll drive out of the city to visit the Inca sites of Kenko, Tambomachay, Puca Pucara and the impressive Fortress of Sacsayhuaman. At 8:00pm we will enjoy a dinner with a folklore show in a typical restaurant.
Standard Hotel: La Joya Imperial 3* in Cuzco or similar
Deluxe Hotel: Royal Inka 3*/ San Agustin D. 4*/ Marriott 5* in Cuzco or similar
Breakfast: IncludedDinner: Included
Day 10

Depart from hotel in the early morning we will head to the Urubamba Valley. We will visit the picturesque indian Pisac Market. Then we could enjoy a typical lunch. In the afternoon, passing through the towns of Calca and Urubamba, we will visit the Inca Fortress and Citadel of Ollantaytambo. In the evening we could enjoy our free time and stroll around the Main Square ,enjoy a delicious Pisco Sour in pubs around the Square of Hot Spring Aguas Calientes. We continue the journey toward the Abra Malaga where we can enjoy the magnificent landscapes of the Cuzco. After a short break of 15 minutes we will continue into the jungle of the Inca trail through the different climates. Then we will go to the height of Alfamayo. Afterwards we continue to the district of Santa Maria.
Standard Hotel: Eco Lodge 3* in Santa Maria or similar
Deluxe Hotel: Eco Lodge Hostal 3*/ 4*/ 5* in Santa Maria or similar
Breakfast: IncludedLunch: Included
Day 11

After breakfast we start with a climb to go to the Inka Trail. As we wind up and down precipitous cliffs over a stunning valley, out tour guide will reveal this ancient and amazing culture. The trail descends to Quellomayo where we will stop for lunch and relax. After lunch we will continue along the Urubamba river, crossing it at one point in a cart and pulley. Then we would walk for about 30 minutes to Santa Teresa Hot Spring, where there is fully equipped with bathrooms, showers, dressing rooms, soccer fields, space for camping and etc.
Standard Hotel: Yakumama 3* in Santa Teresa or similar
Deluxe Hotel: Yakumama Hostal 3*/ 4*/ 5* in Santa Teresa or similar
Breakfast: IncludedLunch: Included
Day 12

Depart in the early morning we will head to bus station for the lnca Citadel of Machu Picchu. Afterwards we will climb 6km to the Huayna Picchu. Then we will come to the Temple of the Moon, one of the three major temples in the Machu Picchu area. Adjacent to it is the Great Cavern. Then we'll participate in a guided tour of the Citadel visiting the Main Plaza, the Circular Tower, the Sacred Sun Dial the Royal Quarters, the Temple of the Three Windows and various burial grounds. The Sun Gates of Machu Picchu is a perfect vantage point overlooking Peru's most famous ruins. After that we will return back to Cuzco.
Standard Hotel: La Joya Imperial 3* in Cuzco or similar
Deluxe Hotel: Royal Inka 3*/ San Agustin D 4*/ Marriott 5* in Cuzco or similar
Breakfast: Included
Day 14

In the morning we will transfer to Cuzco Airport for your flight to Lima. Upon arrival transfer to the hotel. Then we will go for a city sightseeing tour in Lima. The tour includes Lima's Historical Centre, passing by Plaza San Martin, the Main Plaza, the Government Palace, the City Hall, the Cathedral and its Religious Art Museum, the Church of Santo Domingo, with the tombs of Santa Rosa and San Martin de Porras, and Lima's Colonial Balconies. After that, we will visit the Convent and Church of San Francisco. Then we will visit the Basilica of 21 altars, Convent of Cloisters, Capitulary and Clementine Rooms, Chorus and Library of the Monks, the Sacristy with paintings of Surbaran and Ribera. We will also visit El Olivar Park with olive trees, the Central Park of Miraflores and Larcomar, a privileged site to enjoy an amazing view of the Pacific Ocean.
Standard Hotel: Flying Dog 3* in Lima Miraflores or similar
Deluxe Hotel: El Carmel 3*/ San Agustin E. 4*/ Marriott 5* in Lima Miraflores or similar
Breakfast: Included
Day 15

In the morning we will transfer to Lima Airport for the return flight back home.
Breakfast: Included
Close All Expand All