10-Day Across Canada Tour from Montreal 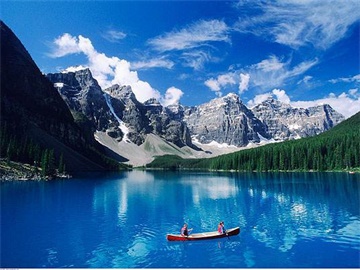 Buy 2 Get 2 Discounted Buy 2 get 2 Discounted on sharing one room. Price already adjusted. 5% Group Discount1. Receive 5% off when you purchase 3+ rooms on the same tour (single order only).
2. Receive 3% off when you book 3+ multi-day tours with minimum order total of $500 at once. Not valid in conjunction with any other discounts or pricing offers.

Depart from Montreal in the morning, we will go to visit Ontario's oldest and biggest provincial park: Algonquin Park. We will stop at the visitor center and walk besides one of the lakes. We'll also stop by one of the outdoor arts gallery to see the paintings from the famous Canadian artists "Group of Seven", Then we will continue to Sudbury and spend night there.
Standard Hotel: Days Inn or simillar
Day 2

We will visit the largest Nickel statue in the world in the morning then pass Lake Huron. We will head to Lake Superior Provincial Park after lunch. After stop by the "wild goose" town Wawa, we will continue to White River. Overnight in Marathon.
Standard Hotel: Days Inn or simillar
Day 3

We will visit the third largest port in Canada Thunder Bay, stop at the Terry Fox Scenic Overlook. Then we will visit Kakabeka Falls. Afterwards we will then go through Kenora. We will stop at the 12-meter "Husky the Muskie" statue before going to Kenora.
Standard Hotel: Days Inn or simillar
Day 4

We will head to Winnipeg and visit the Royal Canadian Mint and the Forks Market. Then we will arrive in Regina.
Standard Hotel: Days Inn or simillar
Day 5

In Regina, we will visit the Provincial Legislative Building of Saskatchewan by inside Lake Wascana. Then we will visit the Royal Canadian Mounted Police Headquarters and Museum. After that we will continue head west and overnight in Medicine Hat.
Standard Hotel: Days Inn or simillar
Day 6

Today we will head to Calgary to visit the 2nd tallest tower in Canada, Calgary Tower. Then we could enjoy a lunch in Calgary Chinatown. Then passing 1988 Winter Olympic site, head to Banff National Park, and take the Banff Gondola to Sulphur Mountain to enjoy the panoramic view of Banff. Stop at picturesque Bow Falls, venue of the famous movie "River of No Return". Overnight in Calgary.
Standard Hotel: Days Inn or simillar
Day 7

Today we will head to the Jasper National Park and visit Columbia Icefield. Then we will take the big-wheeled "Snowcoach" to go up to Athabasa Glacier. Continue to visit along the Rocky Mountains, stop at Bow Lake and Crowfoot Glacier. Then we will go to visit the world-famous Lake Louise, the gem of Canadian Rockies and the Natural Bridge in Yoho National Park. Then we will pass Roger Pass in the Glacier National Park. Overnight Hotel in Revelstroke.
Standard Hotel: Days Inn or simillar
Day 8

Today we continue head west to continue enjoying beautiful mountain scenary. We will enjoy a lunch in Hope, where the famous movie "Rambo, The First Blood" was filmed. Before arriving in Vancouver, we will visit a Pacific Salmon Hatchery. In Vancouver, we will stop in Stanley Park, then passing by Chinatown, continue to Gas Town, stop by the Steam Clock. After that we will head to 2010 Winter Olympic Games Torch in Canada Place. Overnight hotel in Vancouver.
Standard Hotel: Days Inn or simillar
Day 9

We will take the ferry to Vancouver Island, visit the Buchart Garden and Downtown Victoria etc. We will visit the famous Empress Hotel and also the Provincial Parliament Building and Chinatown. Then we will stop at Mile "0" in Beacon Hill Park , the Pacific terminal of TransCanada Highway.
Standard Hotel: Days Inn or simillar
Day 10

Today we will fly back to Montreal. Please refer to the "Departure & Return" for more detailed information.
Close All Expand All