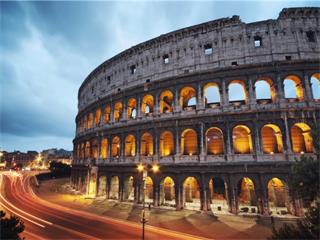 Welcome to Rome! At 5 pm, meet your Tour Director and traveling companions, and leave the hotel for a welcome dinner at one of Rome's lively restaurants.
Standard Hotel: Albani or similar
Dinner: Included
Day 2

Start with a visit to the Vatican Museums and Sistine Chapel with Michelangelo's ceiling paintings and The Last Judgment, followed by a visit to monumental St. Peter's Square and Basilica to admire Michelangelo's Pieta. Then, enjoy views of other major sites as you drive to the Roman Forum to visit the ancient Colosseum, where gladiators once fought. An optional walking tour with a local guide is available to further explore Rome's famous sites.
Standard Hotel: Albani or similar
Breakfast: Included
Day 3

Stop in Orvieto, perched high atop a volcanic rock. Browse through tempting shops in the lanes off Piazza del Duomo, and admire the fabulous gothic cathedral. Taste local pastries at Cafe Montanucci, a historic pasticceria (bakery) for more than 100 years, before continuing to Assisi. Walk along narrow steep lanes and visit St. Francis' Basilica, the hub of a religious order devoted to the ideals of humility, forgiveness, simplicity, and love for all God's creatures.
Standard Hotel: Fontebella or similar
Breakfast: Included
Day 4

Meet your Local Guide for a walking tour through the historic center in Florence. Stand in awe in front of the magnificent cathedral, admire Giotto's Bell Tower, the Baptistry's heavy bronze "Gates of Paradise," and visit sculpture-studded Signoria SquareI. Afterwards, you may wish to shop for Florentine leather goods and gold jewelry, sold by the ounce. Continue through the Apennine Mountains and the flat Po area to Padua for an orientation of St. Anthony's city and your overnight stay.
Standard Hotel: Milano or similar
Breakfast: Included
Day 5

Enter Venice in style by private boat and meet your local guide. Highlights of your walking tour are St. Mark's Square and the byzantine Basilica, lavish Doges' Palaza, and the Bridge of Sighs. Also watch a skilled Glassblower fashion delicate objects in an age-old tradition. Explore Venice at your own pace or join an optional cruise to the charming island of Burano.
Standard Hotel: Milano or similar
Breakfast: Included
Day 6

Arrive in Verona, take pictures of Juliet's balcony and rub the shining breast of her statue for good luck. Next, the Arena, an incredibly well-preserved pink marble Roman amphitheater, where gladiators once fought. Continue to the dynamic city of Milan, where your Tour Director will take you for a pleasant walk to see La Scala Opera House, the glass-domed Galleria, and the magnificent gothic Duomo.
Standard Hotel: NH Milano Touring or similar
Breakfast: Included
Day 7

Your vacation ends with breakfast this morning.
Breakfast: Included
Close All Expand All