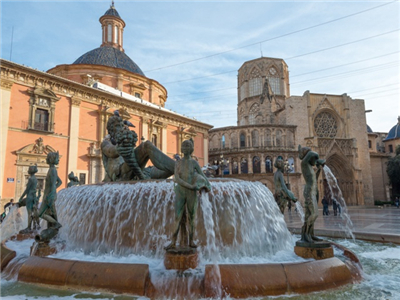 Guests will be picked up in Barcelona at 8:00am. We will depart to Zaragoza, where we will stop briefly for some free time before continuing to Madrid for the evening.
Deluxe Hotel: Emperador or similar 4 stars hotel
Day 2

In the morning, we will make our way to Cordoba through the La Mancha region. Upon our arrival, we will take a sightseeing tour of famous Mosque-Cathedral and the Jewish Quarter. Afterward, we will drive south to Sevilla, where we will enjoy dinner and spend the night.
Deluxe Hotel: Hesperia Sevilla or similar 4 stars hotel
Breakfast: IncludedDinner: Included
Day 3

We will tour Seville in the morning, visiting the Parque de Maria Luisa, the Plaza de Espana, the Seville Cathedral, La Giralda, and Santa Cruz, the city's old Jewish Quarter. We may take an optional tour to the Royal Alcazar of Sevilla, or spend the rest of the afternoon in Seville at our own leisure.
Deluxe Hotel: Catalonia Santa Justa or similar 4 star hotels
Breakfast: IncludedDinner: Included
Day 4

After breakfast, we will make our way to the legendary city of Granada, where we will visit the incredible palaces and gardens of the Alhambra. We will enjoy dinner and spend the night in Granada. Guests can choose optional visit to the caves of Sacromonte and attend a show of traditional gipsy flamenco.
Deluxe Hotel: Melia Granada or similar 4 stars hotel
Breakfast: IncludedDinner: Included
Day 5

After breakfast, we will depart for Valencia, passing many beautiful palaces in the Spanish countryside on the way. Upon our arrival in Valencia, we will have the rest of the day to explore the city.
Deluxe Hotel: Silken Puerta Valencia or Tryp Oceanic or similar 4 stars hotel
Breakfast: Included
Day 6

In the morning, we will eat breakfast, then depart for Barcelona, where our tour will come to an end. Please see "Departure and Return" for more detailed information regarding pickup and drop-off times and locations.
Breakfast: Included
Close All Expand All