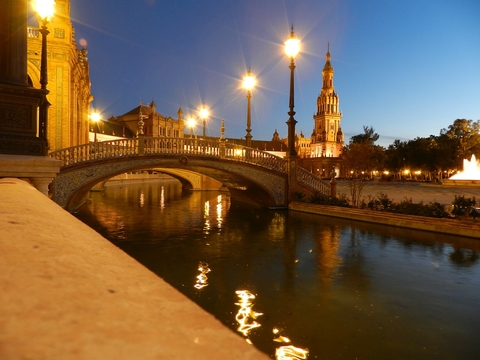 Highlights: Your route will start in Madrid, and continues to the southern part of Spain. There you will experience the traditional Spanish flair of life. Visit Cordoba, Seville, Granada and Valencia. You will reach the pearl of Catalonia, also have the chance to explore our last stop Zaragoza.

After breakfast, we will make our way to the legendary city of Granada, where we will visit the incredible palaces and gardens of the Alhambra. We will enjoy dinner and spend the night in Granada.
Deluxe Hotel: Melia Granada or similar 4 stars hotel
Breakfast: IncludedDinner: Included
Day 4

After breakfast, we will depart for Valencia, passing many beautiful palaces in the Spanish countryside on the way. Upon our arrival in Valencia, we will have the rest of the day to explore the city.
Deluxe Hotel: Silken Puerta Valencia or Tryp Oceanic or similar 4 stars hotel
Breakfast: Included
Day 5

In the morning, we will eat breakfast, then depart for Catalonia, where we will reach the sprawling city of Barcelona, where we will have the remainder of the day to explore.
Deluxe Hotel: Catalonia Barcelona 505 or similar 4 stars hotel
Breakfast: Included
Day 6

After a delightful breakfast, we will embark on a sightseeing tour of Barcelona, viewing the large park atop Montjuic Hill, the Anella Olimpica, the Columbus Statue, and the old Gothic Quarter. We will then have the afternoon at our leisure.
Deluxe Hotel: Catalonia Barcelona 505 or similar 4 stars hotel
Breakfast: Included
Day 7