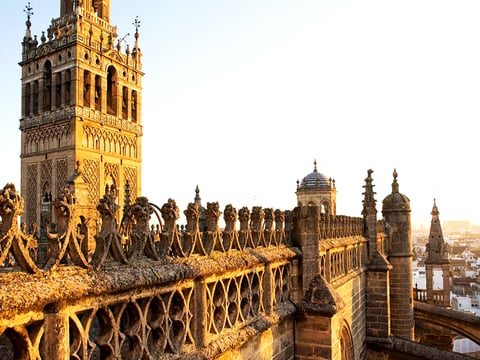 Highlights: On this trip you will spend time visiting the best cities of Andalusia and enjoying beautiful beaches of the Costa del Sol.

We will be free to enjoy the cosmopolitan atmosphere of this beautiful city on the Costa del Sol and explore the beaches, restaurants, bars. We will experience half-board service from our hotel.
Deluxe Hotel: NH Marbella or similar 4 stars hotel
Breakfast: IncludedDinner: Included
Day 6

We will enjoy a free day on the beach in Marbella and another day of half-board hotel accommodations.
Deluxe Hotel: NH Marbella or similar 4 stars hotel
Breakfast: IncludedDinner: Included
Day 7

After breakfast, we will drive to Granada, where we will visit the Alhambra, the massive fortress complex built by the former Arab rulers of southern Spain. We may also take an optional trip to the Caves of Sacramonte and see a special flamenco show.
Deluxe Hotel: Carmen or similar 4 stars hotel
Breakfast: IncludedDinner: Included
Day 8