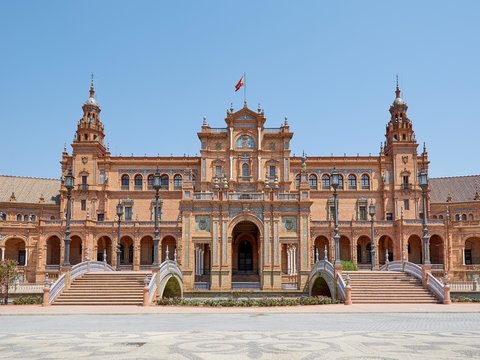 We will depart from the bus terminal in Madrid at 8:00am, making our way to the city of Trujillo in the province of Caceres, Extremadura, where we will have some free time to explore and see the Plaza Mayor many medieval and renaissance buildings that still stand to this day. Afterward, we cross the Portuguese border and continue on towards Lisbon. In the evening, we will have the option of visiting a local venue to experience the traditional Fado music of Portugal.
Deluxe Hotel: Lutecia or similar 4 stars hotel
Day 2

In the morning, we will tour Lisbon to see its most famous sights, such as the Alfama Quarter, the Tower of Belem, the Jeronimos Monaserio. We may also take an optional excursion to the nearby communities of Sintra, Cascais, and Estoril.
Deluxe Hotel: Lutecia or similar 4 stars hotel
Breakfast: Included
Day 3

In the morning, we will depart Lisbon for Fatima, where we will have free time to visit the Sanctuary of Fatima and the Church of the Santissima Trinidade before returning to Lisbon.
Deluxe Hotel: Lutecia or similar 4 stars hotel
Breakfast: Included
Day 4

After breakfast, we will return to Spain and go to the city of Caceres, a UNESCO World Heritage site, to explore this medieval city. Afterward, we will continue towards Sevilla, where we will eat dinner and stay the night.
Deluxe Hotel: Hesperria Sevilla or similar 4 stars hotel
Breakfast: IncludedDinner: Included
Day 5

We will tour Seville in the morning, visiting the Parque de Maria Luisa, the Plaza de Espana, the Seville Cathedral, La Giralda, and Santa Cruz, the city's old Jewish Quarter. We may take an optional tour to the Royal Alcazar of Sevilla, or spend the rest of the afternoon in Seville at our own leisure.
Deluxe Hotel: Catalonia Santa Justa or similar 4 star hotels
Breakfast: IncludedDinner: Included
Day 6

In the morning, we will head to Cordoba, visiting the Mosque-Cathedral, the Jewish Quarter, and more. Then, we will have the rest of the day free to spend at our own leisure.
Deluxe Hotel: Hesperia Cordoba or similar 4 stars hotel
Breakfast: IncludedDinner: Included
Day 7

On our way to Marbella, we will stop in the village of Ronda to see the famous Puento Nuevo Bridge. After some free time here, we will continue to the Costa del Sol until we reach Marbella, where we will eat dinner and spend the night.
Deluxe Hotel: NH Marbella or similar 4 stars hotel
Breakfast: IncludedDinner: Included
Day 8

After breakfast, we will drive to Granada, where we will visit the Alhambra, the massive fortress complex built by the former Arab rulers of southern Spain. We may also take an optional trip to the Caves of Sacramonte and see a special flamenco show.
Deluxe Hotel: Carmen or similar 4 stars hotel
Breakfast: IncludedDinner: Included
Day 9