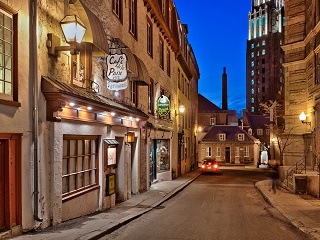 After arrival in Montreal, we will meet with our guide in the evening: welcome meeting, optional dinner & get-together.
Standard Hotel: conveniently located, locally-owned hotel/homestay in Montreal
Day 2

Today we will go for a walking tour around the city during the day. We could enjoy an optional dinner & get-together with the rest of the group in the evening.
Standard Hotel: conveniently located, locally-owned hotel/homestay in Montreal
Day 3

In the morning we will leave from Montreal and travel along the Le Chemin du Roy. On the way, We will also cross by the picturesque villages and the historic districts of Trois-Rivieres and Yamachiche. In the evening we will arrive at the Jacques-Cartier National Park where we will spend the night.
Standard Hotel: eco-cabin in Jacques-Cartier National Park
Dinner: Included (BBQ dinner)
Day 4

In the morning we will explore the Jacques-Cartier National Park or choose to do some outdoor activities such as hiking, kayaking, biking, stand up paddling, wildlife watching, etc. In the afternoon we will go to Saguenay and have an optional lunch there. In the evening we will arrive at our eco-cabins on the shore of Saguenay Fjord, enjoy a BBQ dinner and overnight.
Standard Hotel: eco-cabin by Saguenay Fjord
Breakfast: IncludedDinner: Included (BBQ)
Day 5

After breakfast, we could choose to explore the Saguenay Fjord and take a variety of activities such as hiking, wildlife watching, aerial adventure trails, zip lines and etc. In the afternoon we will explore the northern part of the fjord and discover its maritime environment teeming with wildlife. We will also stop by Baie Sainte-Marguerite. In the evening we will arrive in Grandes-Bergeronnes.
Standard Hotel: conveniently located, locally-owned hotel/B&B/homestay in Grandes-Bergeronnes
Breakfast: IncludedDinner: Included (BBQ)
Day 6

In the morning, we could choose to go for a whale watching by taking a boat or join our guide and try your luck at nearby Cap-de-Bon-Desir, a natural rock with deep waters that attract whales and other water mammals. In the afternoon, we will continue to go to Saguenay. After an orientation walk around the town we will take a ferry to cross Saguenay River and take St. Lawrence Route. Then we will take the New France Route to experience the history of Quebec. Along the way we will visit Shrine of Sainte-Anne-de-Beaupre and Montmorency Falls. In the evening we will arrive in Quebec City: check-in and optional dinner with the rest of the group.
Standard Hotel: conveniently located, locally-owned hotel/homestay in Quebec City
Day 7

Today we will explore the city by ourselves or join our tour guide to visit the best sites of this marvelous place. We will take a walking tour during the daytime and then enjoy optional dinner & get-together with the group in the evening.
Standard Hotel: conveniently located, locally-owned hotel/home-stay in Quebec City
Day 8

In the morning, we could enjoy our free time in Quebec City. Then we will go back to Montreal in the afternoon. If you have an early morning return flight from Montreal Airport, you can take a direct bus from the center of Quebec City.
Close All Expand All