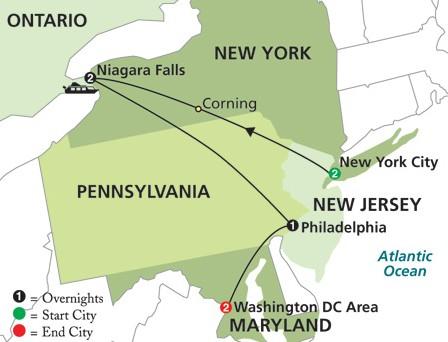 On this affordable vacation, arrive in The Big Apple and venture northwest through the Pocono Mountains to upstate New York. Cross the border to the Canadian side of the Niagara River and spend two nights in beautiful Niagara Falls. Enjoy a sightseeing tour of Niagara Falls, and board the Maid of the Mist for a thrilling boat ride to view the thundering waterfalls from river level. During your free time in Niagara Falls, perhaps visit the Butterfly Conservatory, Great Gorge Adventure, or Botanical Gardens, or ride the aerial cable car. Next, travel southeast through the Appalachian Mountains to the City of Brotherly LovePhiladelphia. Explore the birthplace of American independence on your Philadelphia sightseeing tour before moving on to the U.S. capital, Washington DC. Washington DC is a sightseeing treasure trove, and your tour highlights the well-known sites, such as Arlington National Cemetery and the Korean and Vietnam War Memorials. Your vacation ends with free time to explore Washington DC on your own before you head back to New York City.

Today we will gather in New York City. A Tour Director is on hand this evening to answer any questions. After checkin, guests may spend the day at their leisure.
Standard Hotel: Skyline Hotel
Day 2

Today is dedicated to the exploration of the Big Apple. On this guided tour of New York, NY, we will see sights such as Chinatown, Wall Street, and the Empire State Building. The evening will be free for guests to do as they please.
Standard Hotel: Holiday Inn Boston Brookline
Day 3

Depart from Manhattan, we will head to upstate New York, arriving in Corning midday. Late in this afternoon, we will continue cross the border to the Canadian side of the Niagara River in Ontario. Spend the next two nights in beautiful Niagara Falls.
Standard Hotel: Best Western Plus Cairn Croft Hotel or similar
Day 4

We will start the day with a ride on a Sightseeing Cruise past the world-famous falls. In the afternoon, we will be free to spend the rest of the time exploring the park at own leisure.


*Operation of the Niagara Falls sightseeing cruise is subject to favorable weather and/or river conditions. When weather is unfavorable, a walking tour through the scenic tunnels will be substituted.

Today we will head southeast through the Appalachian Mountains and into the Susquehanna River Valley. Then, we will arrive in the handsome city of Philadelphia for an overnight stay.
Standard Hotel: Holiday Inn Historic District Philadelphia
Day 6

Our morning will be spent in Philadelphia, PA, where we will see the many historic buildings the city has to offer. From there, we will head south to Washington, DC, where guests are invited to join an optional night tour of the city.
Standard Hotel: Crowne Plaza Old Town Alexandria
Day 7

Today we will tour Washington, DC, stopping at all of the famous monuments, including the Korean and Vietnamese War Memorials, US Capitol, and White House. We will also pay a visit to Arlington National Cemetery.
Standard Hotel: Crowne Plaza Old Town Alexandria
Day 8

Tour ends this morning. Guests can extend the tour with extra nights and explore Washington DC further. For guests who would like to return to New York City, we will transfer you to your New York hotel.
Close All Expand All