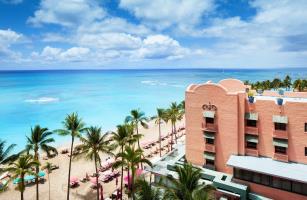 Buy 2 Get 3rd DiscountedBuy 2 Get 3rd Discounted on sharing one room, Price already adjusted. 5% Group Discount1. Receive 5% off when you purchase 3+ rooms on the same tour (single order only).
2. Receive 3% off when you book 3+ multi-day tours with minimum order total of $500 at once. Not valid in conjunction with any other discounts or pricing offers.
Airport Pick up

If you want to cover most of beatifull places all in one time, you must choose this tour! But trust me, you will want to come back again.

I went Hawaii for my birthday and this tour absolutly worth the money! Wakiki beach is my favorite. I didn't have high expectation on PCC, but the show was fantastic. For the hotel, I recommend Sherat... More>>

We will begin our day by visiting the north shore of Oahu to see the Tomb of Marshal Zhang Xueliang and Miss Zhao Si, Chinaman's Hat and Kualoa Ranch. We will pass through the campus of Brigham Young University Hawaii to see the Mormon Temple and watch a brief historical documentary. At lunch, we should be sure to try the Kahuku Town Shrimp Meal. Then, we will continue to the world-renowned Sunset Beach and Turtle Bay (please note that in the interest of environmental conservation, we may not be allowed to this area on certain days). Passing by Haleiwa Town, we will visit the Dole Plantation.
Option 2:

Today, we will fly to Big Island, where we will go sightseeing at places like Hawaii National Volcano Park, black sand beaches, orchid gardens, Rainbow Falls and the Macadamia Nut Farm. Then, we will transfer to a hotel in the area.
Standard Hotel: Grand Naniloa HoteL-By Double Tree or similar
Day 6

Guests will be able to enjoy their free time until it is time to transfer to the airport for their departure flights.
For those customer who choose Oahu North Shore Adventure tour, please notice that the exact departure time and date for this option tour would be scheduled by tour operator. The listed itinerary is only for reference. And also customers need to pay extra $10 per person to the tour guide and bus driver as gratuity.
Close All Expand All

I recommend this tour!
If you want to cover most of beatifull places all in one time, you must choose this tour! But trust me, you will want to come back again.

I recommend this tour!
I went Hawaii for my birthday and this tour absolutly worth the money! Wakiki beach is my favorite. I didn't have high expectation on PCC, but the show was fantastic. For the hotel, I recommend Sheraton, it's close to the beach.