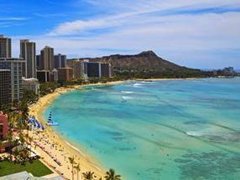 Price shown is based on the lowest price per person over the next 30 days $2300 $2325 Save $25
Available:
Daily
Depart from:
Honolulu, HI
Language:
English; Mandarin Chinese
Duration:
9 Days 8 Nights

In the morning, we will visit the Pearl Harbor for the famous remains of USS Arizona Battleship after the Japanese attack in World War II. A Navy Vessel will take you up to the Arizona Memorial. After that is the City Tour (sightseeing - only stop one point here) including State Capitol, Washington place (Governor's Mansion), Iolani Place and King Kamehameha statue.
In the afternoon, take a one and a half hour drive to Polynesian Cultural Center located on north shore. It is a center established by the Mormons and contains seven Polynesian tribes including Samoa, Maori, Fiji, Hawaii, Tonga, Tahiti and Marquises Islands.
Standard Hotel: Queen Kapiolani Hotel (Newly Renovated City View)
Day 3

After picked up from our hotel in the morning, we will head to view the east part of Oahu and take a Mini Circle Island Tour, passing by the world famous Waikiki Beach, Kahala, Diamond Head Look out, Hanauma Bay Nature preserve Area (not into the beach), Halona Blowhole, Pali Lookout.
In the afternoon, we will go on a North Shore sightseeing tour including Hawaii famous Dole Plantation, to try the delicious Dole Whip ice cream on your own expense. Then we will continue to the Haleiwa town. After a brief stop there, we will pass by the Sunset Beach where we will have chance to see some turtles lying on the beach. Before returning back to the hotel, we will pass by the Tomb of General Chang Hsueh Liang and Byodo-In Temple
Standard Hotel: Queen Kapiolani Hotel (Newly Renovated City View)
Day 4

In the morning, we will take a plane to the big island (KONA Airport). After being picked up by local tour guides and transfer to the hotel, we are free to enjoy own time in the hotel. Hilton Waikoloa Village is the most extensive resort in Hawaii. The resort offers the guests the option to enjoy their saltwater lagoon or to have fun with the dolphins(optional). It also has an on-site shop, gourmet restaurants, a canal boat and a museum walkway with artwork around the Pacific Ocean. We can explore the Waikoloa Beach Resort on a light rail or boat ride.
Standard Hotel: Hilton Waikoloa Village
Day 5

Depart from the hotel in Kona, we will drive all the way through the forest to the southernmost territory of the United States. It is still the most popular cliff dive site on the Big Island. Through the vast landforms of the Eastern African savannah, you will experience the thrilling scenes of the Lion King's cartoon movie. Then we transfer to the local people's booster bus, pass the bumpy mud road, and finally arrive at the Hawaii's unique Green Sand Beach. We will spend night at the Hilo hotel.
Standard Hotel: Hilo Hawaiian Hotel
Day 6

Today, we will depart from the hotel and then head to the Rainbow Falls. Afterwards we will come to visit the Akatsuka Orchid Gardens. Then we will drive to enjoy a lunch. After that, we will continue to the Richardson Black Sand Beach at the foot of the volcano, then proceed to the Hawaii Volcanoes National Park, the Jaggar Volcano Museum, and then we will look at the park's unique geographic features such as the craters, the Lava tube, and the steaming vents of the volcanoes. In the evening, we will go on a Mauna Kea Stargazing Tour at Visitor's Station to marvel at the Hawaiian sky, and to experience one of the most sacred places in Hawaii. Overnight in Hilo hotel.
Standard Hotel: Hilo Hawaiian Hotel
Day 7

Today we will take a 30-minute hike to the Kalapana lava field of 1985, then we will drive up the east coast of the Big Island to see the views along the way, and to Puhoiki to see the black sand beaches and sea hot springs formed during the latest volcanic eruption in 2018. Guests can dip their feet in the hot spring water. Swimming is not recommended at present. Then we will get back to Hilo for lunch. In the afternoon we will go to the Akaka Falls on the north shore of the Big Island. Stop at the farmer's market for fresh papayas and other tropical seasonal fruits. After that we will go back to the hotel to rest.
Standard Hotel: Hilo Hawaiian Hotel
Day 8

In the morning we will take the inter-island flight from Hilo to Maui. After arrival, we will enjoy the island's beautiful scenery including Iao Valley State Park. Then we drive on the coastal highway and arrive at the Lahaina Town which is the famous whaling port of the 18th century. After that, we will continue to visit the Tropical Botanical Garden and Kapalua Bay Villa Area. Once finished, we will fly back to Oahu at the end of the day. After picked up by the tour guide, we will go to hotel and rest.

*We are not responsible for any canceling flight.*

Today we will check out the hotel and then drop off at the Oahu airport. Tour ends here.
The sequences of itinerary may be adjusted according to different tour departure dates, but the contents of itinerary will not be changed.
Close All Expand All