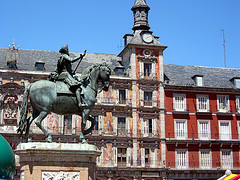 Photo By: pablo.sanchez
From USD

In the morning, we will enjoy a delicious buffet breakfast before embarking on an escorted sightseeing tour allowing us to see some of the city's most notable attractions, like the Puerta del Sol, the magnificent Fountains of Neptune and Cibeles, stately Alcala Gate, bustling Gran Via, the Plaza de Espana and the Plaza de Oriente.
Standard Hotel: Hotel Agumar or similar
Deluxe Hotel: Hotel Catalonia Goya or similar
Day 3

We will depart from Madrid after breakfast, traveling through the once-remote region of Extremadura. We will then arrive in the ancient city of Merida, where we will have some free time for lunch before exploring the Roman ruins and well-preserved Amphitheater. Then, we will continue to Sevilla for the evening.
Standard Hotel: Hilton Garden Inn or similar
Deluxe Hotel: Melia Lebreros or similar
Day 4

Today, we will tour the city of Sevilla, the "Pearl of Andalusia," seeing the Torre del Oro, tranquil Maria Luisa Park, the quaint Santa Cruz Quarter, and finally, the massive Cathedral with its Giralda tower. The afternoon is free to continue exploring the city or shop. In the evening, there is an option to see a performance of live Flamenco music while enjoying local wine.
Standard Hotel: Hilton Garden Inn Sevilla or similar
Deluxe Hotel: Melia Lebreros
Day 5

After breakfast, we will depart Sevilla for Cordoba, visiting the Mosque-Cathedral, one of the most marvelous religious buildings in the world. Then, we will continue to Granada, passing thousands of acres of olive groves. It is suggested that we spend our evening visiting the quaint Albaicin Quarter, where we will see the city illuminated beautifully.
Standard Hotel: Macia Gran Via / Alixares or similar
Day 6

In the morning, we will enjoy an escorted tour of the amazing Moorish palaces and fortresses of the Alhambra complex and its Generalife Gardens. Afterward, we will depart for the resort area of the Costa del Sol.
Standard Hotel: Melia Costa Del Sol, Torremolinos or similar
Day 7

After having buffet breakfast, we'll enjoy a brief visit of the city before departing to the picturesque city of Ronda perched on the mountains and an enclave full of charm and history. Upon arrival we will visit to the city of Ronda. Free time for lunch on your own (Lunch included in value package). In the afternoon we will return to Malaga (Costa del Sol).
Standard Hotel: Hilton Garden Inn Malaga or similar
Day 8

After breakfast, guest will be transferred to the Malaga airport for their return flights.
Note:The itinerary of day 7 will change as below (until 3/31/2019):
Day 7 Csota Del Sol Free day
After having buffet breakfast, we will have a free day to enjoy this vacationers paradise. An optional tour is available to exotic Tangier, Morocco.
Close All Expand All