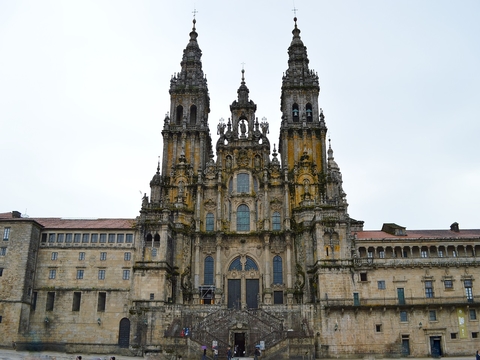 Guests will be picked up at the bus terminal in Madrid at 8:00am. We will then drive to Zaragoza, stopping there briefly. After this, we will continue to Basque Country until we reach San Sebastian, where we will stay the night.
Deluxe Hotel: Silken Amara Plaza or similar 4 stars hotel
Dinner: Included
Day 2

Today, we will depart for Lugo, where we will spend some leisure time visiting the old town. Later, we will arrive in La Coruna to take a brief panoramic tour. In the afternoon, we can take an optional excursion to the Rias Altas, traveling through quaint villages like Pontedeume, Betanzos, and more.
Deluxe Hotel: Tryp Coruna or similar 4 stars hotel
Breakfast: IncludedDinner: Included
Day 5

In the morning, we will depart La Coruna for Santiago de Compostela, an important pilgrimage center, where we will see the magnificent Plaza de Obradoiro and the Cathedral of Santiago de Compostela. The afternoon will be free to spend at our own leisure.
Deluxe Hotel: Gran Hotel Santiago or similar 4 stars hotel
Breakfast: IncludedDinner: Included
Day 6

In the morning, we will enjoy breakfast before traveling through the landscapes of the region of Rias Baixas. We may stop at O Grove to take an optional tour to see the oyster and mussel farms. Afterward, we will continue to Vigo, where we have the option to Sana Tecla. Then we enjoy the beautiful landscape until we get to Porto. Accomodation.
Standard Hotel: Mercure Porto Gaia
Breakfast: IncludedDinner: Included
Day 7

After breakfast we will take panoramic tour to admire the cathedral, Stock Exchange building, St. Clara church... we will finalize at a local winecellar to enjoy a tasting of the famous Port wine. Free time to take an optional cruise down the Duero river . Accommodations.
Standard Hotel: Mercure Porto Gaia
Breakfast: IncludedDinner: Included
Day 8

After a hearty breakfast, we will depart for Salamanca, making a short stop to see the famous Plaza Mayor before we continue to Madrid, where guests will be dropped off to end this tour.
Breakfast: Included
Close All Expand All

I recommend this tour!
Everything was good but one day in Porto was less . Have not seen anything much .also I paid 1535 $ for 8 days and there was another lady from US . She paid 1100 for 11 days tour . So mine was expensive for the same tour and 3 days extra . Madrid was included in her itinerary and mine not . Else was a wonderful experience , good , hotel , guide all was good except but higher price when someone paid less then you.

Thanks Poonam for your review. Please note that reviews are for travelers to share your whole experience with the world. Now, when it comes to the difference in pricing we must point out that there are travelers who book their tours way in advance and take advantage of a promotion and sales at that moment. We are really sorry if you were not able to lock a good deal like the lady you met. Same as flight tickets tours rates may be subject to change depending on the date you are traveling. ~ IM
Replied by: TakeTours on 2018-05-16